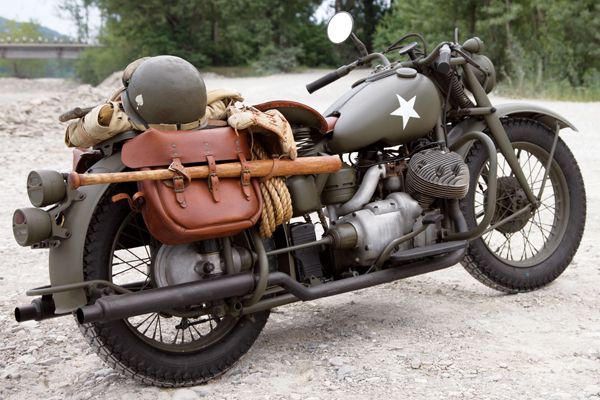 Motorbikes represent different things to different people. To most, though, they represent freedom and the American spirit. There is the romantic notion that is in the back of just about every rider’s head about how great it would be to just get on the bike and explore the country while forgetting about their daily stresses. While most of us aren’t lucky enough to be able to do that, what we can do is ride when we get the chance. We can also look at some of the classic bikes from American history to bring up those feelings of nostalgia or feelings of a time where you wish you had been alive and riding. Let’s look at a handful of the most iconic classic motorbikes.

There is something really cool about these bikes. In fact, it’s a combination of things. They have a classic look and feel to them that looks like it has stepped out of the pages of a Captain America comic book from the 1940s. Of course, this is no accident. The WLA was produced for the United States Army just before the country entered WW2.

It was very similar to the WL, which was the civilian model, but there were some differences. These include the colors. They were painted in black or olive drab, and there were no shiny surfaces on the bike. They were all Parkerized or blued, which helped to provide protection for the steel. Another difference was the fenders, which did not have sides on the WLA. The bikes have a great look and they are a true piece of history.

Here’s another great bike from 1940. Indian is easily one of the most well-known and popular brands of motorcycle in the world. The Chief was truly stylish, and one of the biggest standouts of the bike would have to be the fenders, which were new to this model. They also were highly reliable and featured a sprung frame, which made riding the bike extremely comfortable when compared with the Harleys of the era. While the 1940 Indian Chief is one of the bikes that gets a lot of attention because of the sweeping fenders, it is important to recognize the other Indian motorbikes that were created from the early 1920s to the early 1950s. They were all well made and had a great style to them that many feel is unmatched.

Harley has been producing the Sportster since 1957, and it is one of the most popular and best-selling bikes in the world. These were a departure from the typical bikes that Harley was producing at the time, as it tried to combine style with speed, while not being quite as comfortable as other bikes. The speed, the look, and the V-twin proved to be very popular at the time, and those bikes from the late 50s and 60s still have a great look to them.

There are quite a few options for those who are looking for a bike that they want to restore and get back on the road, and these are some good options to consider. Of course, these are just three of the countless classic motorbikes that you can still find today. What’s your top choice for classic motorbikes?