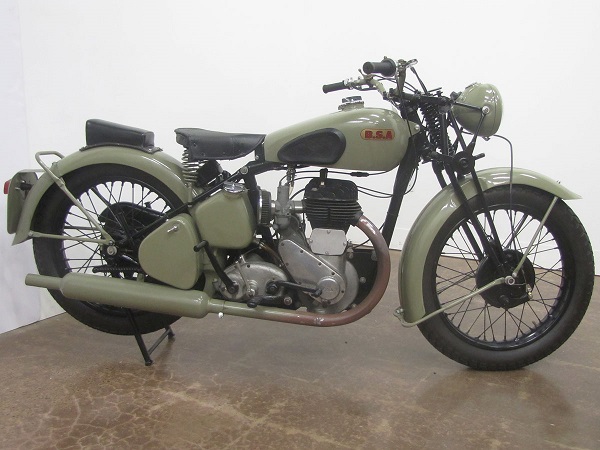 With a production run spanning decades and over 126,000 units produced for WWII alone, the BSA M20 remains one of the single most iconic bikes of the era. Manufactured by Birmingham Small Arms Company in Small Heath, Birmingham, the bike became the proverbial phoenix, rising from the ashes of initial failure and ascending to pre-eminence.

Unlike other bikes of the era, the M20 originated as a wartime vehicle. It was initially designed in 1936 but failed its test run and evaluation. The military decided that there was just too much engine wear because, after 6,000 miles, the prototype required a piston and cylinder replacement. BSA went back to the drawing board, and the subsequent 1937 design succeeded. Created by Val Page, it featured standard civilian components upgraded with military options, such as a larger headlight and unique filler caps for oil and fuel.

Despite the better engine wear, the bike still received criticisms. Many felt that its ground clearance was just too low. Others felt that it was too heavy, or too slow, compared to some other options on the market. However, it ultimately succeeded thanks to its tremendous reliability and the ease of maintaining the bike.

As WWII’s pace increased, the need for transport also grew. More and more M20s were ordered, and BSA ultimately sent orders to all three branches of the British military. This allowed the bike to see action in virtually every theatre of the war and proved it to be a true workhorse unsurpassed by other models in use.

The M20 was so successful at what it did and, ultimately, so appreciated by the military, that orders continued long after WWII ended. In fact, the bike’s production continued from the 1930s all the way through the 1950s, albeit it in increasingly smaller numbers. Ultimately, while official production stopped in 1955, the military continued to use the M20 until the end of the 1960s for several reasons, not the least of which was the easy access to replacement parts.

While the M20 might have cut its teeth in the furore of WWII, the bike was not destined for use solely as a military vehicle. After the end of the war, BSA repainted it in black and began selling to the general public. The only real modification to the bike came in 1951 when the cast-iron engine was eliminated, and an alloy engine was installed. Stylistically, the bike remained much the same as it had been in the 1930s. Ultimately, that contributed to its decline in popularity as twin cylinder-bikes eventually became more popular in the late 1950s.

Today, the BSA M20 remains a popular bike with collectors and restorers for many reasons, including its aesthetic and its connection with popular culture. While spare parts have become harder to find in recent decades, the M20 remains one of the most-easily restored classic motorcycles, whether you’re interested in creating a daily driver or want to restore and sell.