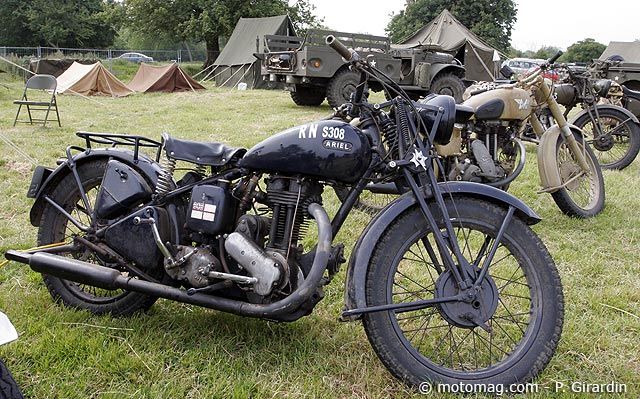 When you think about WWII-era motorbikes, chances are very good that Norton comes to mind. However, Ariel should also occupy that space. The company’s W/NG 350 went on to become one of the most recognisable bikes of the century.

The Development of the W/NG 350

What would eventually come to be known as the W/NG 350 originated in the 1920s when Ariel’s chief designer, Val Page, initially designed the engine. It was used in Ariel’s Red Hunter line of motorbikes but was redesigned in 1932 for use by the British Military.

Initially, Ariel submitted two engines to the military for testing in comparison to the Norton engine, as well as for use-specific testing. These were a 497 cc overhead valve single and a 497 cc side-valve single. Both engines held up well, and Ariel decided to move forward with a modified third option – a 348 cc overhead valve model that would officially become the W/NG 350.

This bike was based on the existing NG with considerable alterations made to it. For instance, the bike’s ground clearance was raised significantly. It was also reinforced in many areas to help it handle use on unpaved surfaces more easily.

However, despite testing well initially, the military decided that the W/NG 350 was only “fair” for use, and they would only utilise it in the case of an emergency. The French, on the other hand, immediately ordered 153 units to be delivered, with 2,600 delivered to the British military. After the events at Dunkirk, however, the British military suffered a massive loss of equipment and were forced to order the W/NG 350 at much higher rates. Ariel’s manufacturing efforts were maxed out, with the company delivering as many motorbikes as possible. Due to demand, many non-military models were also converted, including NH, VH, VG and VB models.

The Ariel W/NG 350 was manufactured from 1940 through 1945, and little about the bike changed during that time. All military-designated models were outfitted with pannier frames to support bags, as well as dual triangular toolboxes. Racks were installed on the rear for additional cargo capacity, and the headlamps were masked. The foot pegs were made from steel due to the rubber scarcity, and the handgrips were woven from canvas for the same reason. Later models featured pressed steel chain case covers and timing covers as well, due to the increasing scarcity of aluminium at that time.

At the close of WWII, Ariel switched manufacturing back over to a consumer focus. 800 W/NGs were sent to the Danish military, while most of those still owned by the British military were decommissioned, stripped of their military-specific gear, and sold on the open market. The result of this is that war-equipped W/NG 350s are exceedingly rare and quite valuable. Even consumer designed W/NG 350s of the era are relatively rare and can command high prices with collectors.