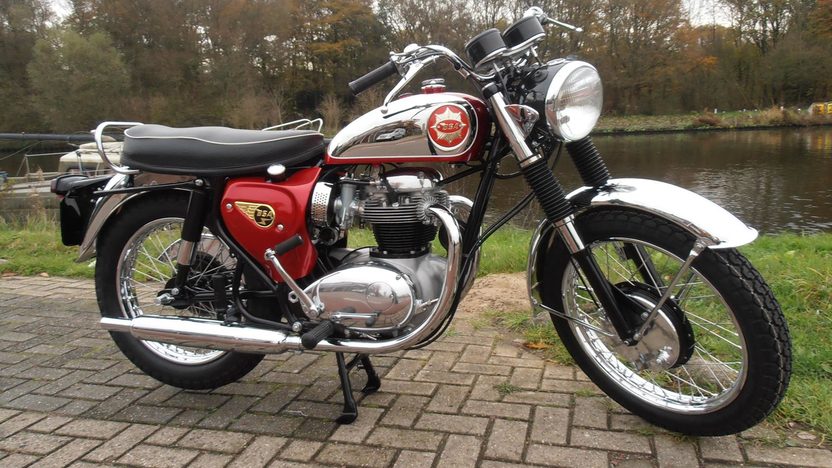 Although its production run was rather short lived, the BSA A65 Rocket remains one of the more iconic motorbikes of its day. It featured a relatively large engine for its time, as well as two into one exhaust designed to make the bike more sport-oriented while also reducing exhaust noise. Today, the A65 is a sought-after collectors’ item.

Originally manufactured in 1964, the Rocket would be produced through 1972, when BSA stopped all production. Eventually, the company was absorbed into Manganese Bronze Holdings and finally mothballed when the plan to merge BSA, Triumph and Norton failed.

Specifications of the BSA A65 Rocket

The Rocket featured a 650 parallel twin cylinder engine. This allowed the bike to cruise at 85 mph, with a top speed of 108 mph. The engine’s actual output was 49 hp. BSA used that performance to brand the Rocket as their fastest production bike on the market, although the specially tuned A65 Thunderbolt (US market only) offered slightly better performance at the cost of a smaller fuel tank. The BSA Lightning Rocket was another highly-tuned variant with an even smaller fuel tank and twin Amal 389/206 carburettors.

The A65 Rocket was air cooled, and it used a dry sump system for engine lubrication with a twin coil ignition and kick-start cranking. The four-speed gearbox could be changed out for an optimised version with closer gear ratios on the Lightning Rocket variant.

The market reception for the A65 Rocket was less enthusiastic than BSA had expected. There are many reasons for this, but one was the simple fact that BSA’s marketing did a poor job of promoting it. Another factor was the rising popularity of smaller, more fuel efficient import bikes from manufacturers like Honda. However, the A65 had its own role in the lack of success.

The engine was well developed, but there were problems with oil pump warping, due to the use of an alloy rather than cast iron. This resulted in less oil being delivered than was optimal. At higher speeds, this caused the less-than-ideal pump to work against centrifugal force, further reducing lubrication.

Other problems included fast wear of shims and thrust washers on 1966 models due to BSA’s decision to change to a roller race, rather than continue using a caged ball bearing on the drive side. Other consumer complaints included a hard, uncomfortable suspension, and problems with the width of the fuel tank.

However, the bike was noted as being very confident on the road, and the engine was rated as being reliable. The brakes were described as being smooth and sure, with plenty of power to spare.

Today, the A65 Rocket is definitely a collector’s item, although the variants are often more valuable. The US-bound version offered higher handle bars and slightly better performance, and because of that, it usually commands a higher price than the UK version.