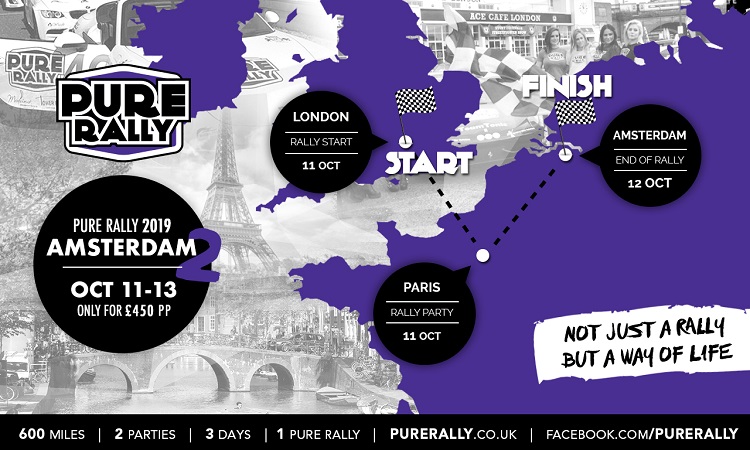 Pure Rally has made a name for themselves as not just a rally organiser, but as one of the most enjoyable event creators in the UK and Europe. The organisation puts on multiple rally races each year, complete with nightly after parties, glamorous models, valuable prizes, and more. The Amsterdam Rally is set to be one of the best yet for the company. What should you know?

The Amsterdam Rally will be held from 11 October through 13 October. However, you’re recommended to get to the starting point on 10 October for registration and to attend the party before the race commences the next day. You’ll probably also want to hang around on 14 October just to recover from the festivities.

How Competitive Is the Rally?

It should be noted that while there are some aspects of the rally that require technical driving skills, this event is more focused on fun than on actual racing. It is suitable for drivers of all skill levels.

What’s the Route and Schedule?

You’ll arrive on 10 October in London where you’ll attend registration and the before party. The next day, all racers will convoy to Paris for a night of partying before heading out the next day to Amsterdam, where you’ll visit nightclubs and enjoy yourself. The final leg of the race takes you back to London for another round of partying.

Are There Restrictions in Place?

There are some restrictions. For instance, the event is capped at just 50 entries and it is first come, first served, so get your name in as soon as possible. Otherwise, you’ll be forced to wait until next year. You are also required to pay a deposit of £250 per a person. The remainder of the entry fee will be due at the start date. The deposit is necessary to reserve your space in the rally.

There are a few other rules and requirements, as well. For instance, cars are the only vehicles allowed – no motorbikes. You must also be at least 18 years of age. Finally, you’re required to have a team of two (you and a navigator). However, you can have more than two people on your team if you like, although each will be required to pay the registration fee.