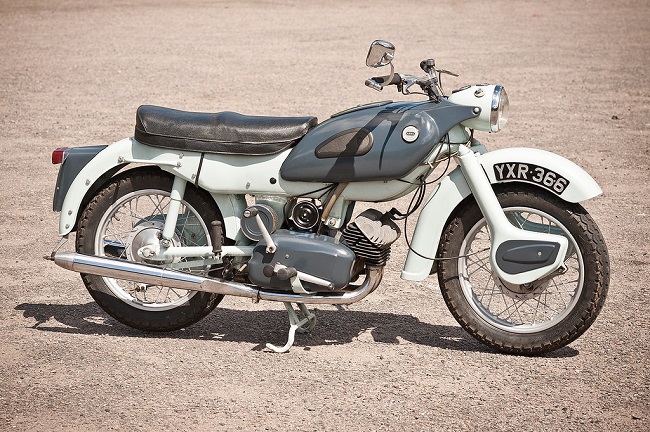 The Ariel Leader might not be the first bike you think of when picturing classic British motorbikes, but it certainly has its place in that history. When the Leader first debuted in the late 1950s, it offered an iconic style and design found on no other bike at the time.

The Birth of the Leader

The Ariel Leader was first envisioned in 1956-57 and went into production in 1958. It offered a large engine for the time – 250 cc. The engine was suspended from a backbone made from 20-gauge steel panels that formed the body of the bike. The fuel tank was actually located within the body as well, accessible through a fuel door similar to a car’s fuel tank. The bike also offered a dummy fuel tank that was actually a storage area with sufficient space to store a motorcycle helmet. While the Leader offered many innovations, it was the fully enclosed body that truly stood out to consumers.

In addition to the full body, the Leader offered buyers a myriad of features, including the following:

The goal of the Leader was to combine the comfort and “fun” of a scooter with the performance and capabilities of a full-size motorcycle. It succeeded in that mission, and was very popular, at least initially.

The Leader’s engine offered a few additional unique aspects. For instance, the rear bracket that held the engine in place was also the air intake. This helped to reduce weight, but also production costs. To help reduce height and make the motorcycle more “scooter-like”, the twin, cast iron cylinders were tipped forward at a 45-degree angle. An upshot of this was that it significantly dropped the bike’s centre of gravity, allowing better handling and stability.

Further Models and the Ariel Arrow

The Ariel Leader debuted to critical acclaim and solid sales. It even won the Motor Cycle News nomination for motorcycle of the year for the 1959 model year. The wide range of features and extras available to buyers also helped to ensure that no two Leaders to hit the road were identical.

The Ariel Leader ran from 1958 through 1965 and remained largely unchanged throughout those years. In all, 22,000 Leaders were manufactured during that production run. When buyers started veering away, Ariel responded by stripping the Leader down and dubbing the resulting motorcycle the “Arrow”, which was followed by the Golden Arrow. However, the influx of Japanese motorcycles was poised to hit the UK at this time, and Ariel never truly recovered from that.

Today, virtually any version of the Ariel Leader is considered very collectible, although earlier models in better condition certainly command the highest prices on the market. The fact that over 20,000 models were manufactured also means that original parts can still be sourced for authentic restoration of aging models.