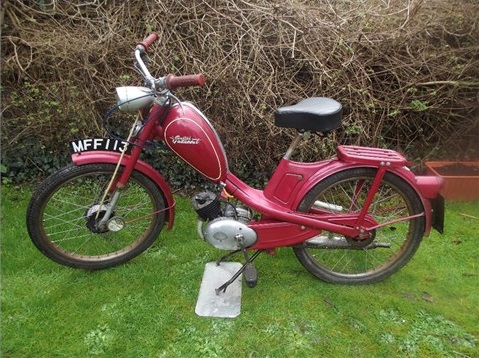 While Britain has certainly produced her fair share of iconic motorbikes, it is sometimes easy to forget that scooters and mopeds have been just as large a part of the UK’s motorbiking heritage. The Phillips Gadabout, and to a lesser extent its less expensive sibling, the Panda, is a good example of that connection in action.

The Origin of the Gadabout

The first Gadabout model, the P39, was introduced to the world in 1955. However, there was considerable competition at the time, with other manufacturers like Hercules and Mercury bringing their own mopeds to the market. Norman and Brown were also among those companies.

The upshot of all this competition was that the Gadabout received little initial press, with most of the limelight going to higher-end models with more unique features. However, the Gadabout was only to remain behind for a short time.

Unlike the lower-priced Panda, the Gadabout featured a pressed-steel frame for durability and strength (the Panda featured a tubular frame similar to a bicycle). Other significant features of the Gadabout included a telescopic front fork suspension, as well as a two-speed manual transmission.

The P45 model succeeded the previous version, which included a three-gear engine, along with a larger fuel tank. The P50 Deluxe variant came shortly afterward, and was Phillips’ flagship, decked out with a three-gear Rex engine with a new, smooth crankcase.

Sadly, at least for fans of Phillips, the company was not long to remain independent. By the 1970s, Phillips was part of Raleigh Industries, which was a part of the Tube Investments Group, and eventually the manufacturer simply faded away. The Phillips name still appears here and there, though.

Collectability of the Gadabout

While the Gadabout might not command the same level of interest as some of the more powerful, racing-inspired motorbikes of yesteryear made in the UK, it does have a loyal fanbase. The fact that the moped was produced for many years with few real changes means that there are models available for restoration, as well as donor models for original equipment. Some parts from the Panda can also be utilized on the Gadabout, as well.

In general, the older the Gadabout, the more it will be worth. For instance, a first-generation Gadabout with the seven-pint fuel tank in good condition will be more collectible than one produced near the end of the production run with the 10-pint fuel tank, simply because the version with the smaller tank is rarer and more difficult to find. With that being said, end-run P50s are likely to be worth a considerable amount in good condition because they were only produced for about two years before being replaced by rebadged Motobécane products.

When searching for a Gadabout to restore, be aware that many of these mopeds will suffer from rust, particularly along the fenders. The fact that the moped used pressed steel panels rather than a tubular bike frame alone like the Panda does mean that these models likely have a higher rate of survivability in storage.