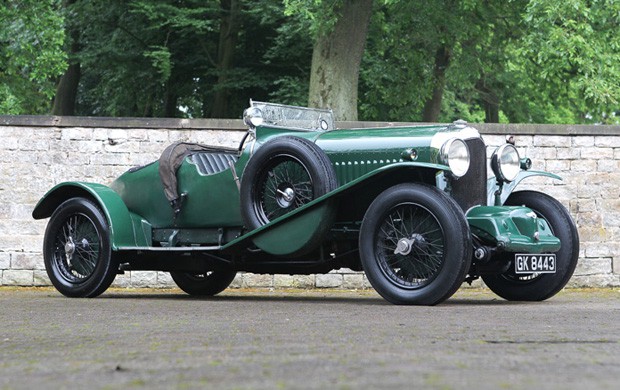 The name Bentley is synonymous with refined power, performance, and precision around the world. A great deal of that reputation hinges on the marque’s prowess on the track, as well as its ability to design and develop cars that offered plenty of power as well as comfort for regular drivers. The Bentley 4 1/2 Litre is a prime example of that balance.

The beginnings of the 4 1/2 Litre can be seen in the preceding 3 Litre model. These cars had sold relatively well with the company’s audience, but there was little more that could be done in terms of development and refinement. In addition, Bentley was facing stiffer and stiffer competition both on the track and in the consumer market from brands like Bugatti. The 4 1/2 Litre was the answer to these pressures.

The 4 1/2 Litre was significantly larger and more luxurious than the previous 3 Litre model – 50% larger, in fact. The larger in-line four engine also managed to produce significantly more power than the older engine, while the chassis was only slightly heavier.

While Bentley manufactured the engine, drivetrain and other core components, the body was manufactured by Weymann. It featured a canvas top, a wind-resistant bonnet, and a braided rope-wrapped steering wheel.

Ultimately, 720 vehicles were produced between 1927 and 1931, and drivers lauded its reliability. It should be noted that the supercharged “blower” version was not noted for being reliable, due in large part to W.O. Bentley’s refusal to allow the engine to be modified, and the subsequent mounting of the supercharger to the front of the chassis.

The Bentley 4 1/2 Litre was ultimately succeeded by the Bentley 6 1/2 Litre.

The 4 1/2 Litre was able to produce 110 hp for touring models. However, racing-oriented models produced 130 hp. Bentley limited the engine speed to just 4,000 rpm to avoid damage, and the cast-iron engine had only a single overhead camshaft. Notably, the 4 1/2 Litre had four valves per cylinder, which was a key to creating more power. Most comparable cars of the day only had two valves per cylinder.

You cannot talk about the Bentley 4 1/2 Litre without mentioning the Blower Bentley – a 4 1/2 Litre outfitted with a supercharger. A total of 55 “blower” models were produced during the production run. While the blower model was not as powerful as some models produced by competing marques, it did set several speed records, and it was an undeniable force in the world of racing, particularly at the 24 Hours of Le Mans, where Sir Henry “Tim” Birkin’s design won acclaim.

Production of the 4 1/2 Litre stopped near the end of 1931. At the time, three different models had been offered – a tourer, a drophead coupe, and a four-seat sporting version. Well-maintained examples of the car can still be found today, although most sell for around €1,000,000.