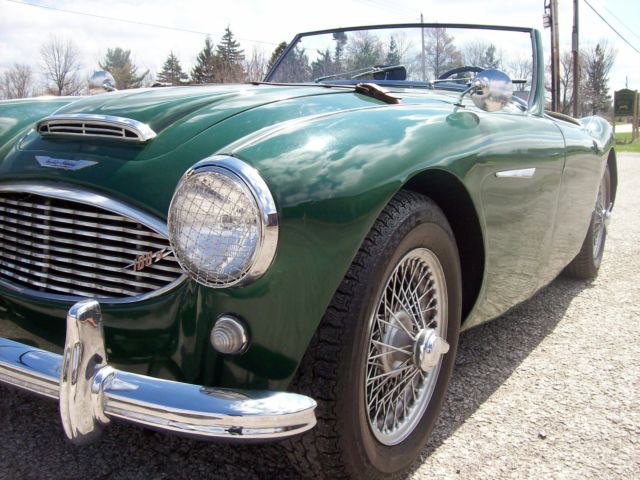 When it comes to the world’s most iconic roadsters, few models can compete with the Austin Healey 100/6. The body style was actually produced from 1956 through 1959 with only a few changes.

Donald Healey envisioned the original 100 as a competitor to the MG and Jaguar models that dominated the market at the time. He wanted to produce a fast sports car that offered outstanding handling and on-road performance, but at a price point that more drivers could afford. This would become the 100.

Initially, Austin Healey used a 102 bhp BMC C-Series engine to power the 100/6. It was specially tuned for the model, but the automaker stepped things up from 1957. For the ’57 model, the engine produced 117 bhp thanks to a newly designed cylinder head and manifold. Overdrive was also removed as a standard feature and made optional.

In addition to using a more powerful engine to the 100, there were several other changes made to the 100/6. For instance, an oval grille was introduced, and the new model also featured more taillights. The body was lengthened to make room for the new engine as well. This added weight and heft to the car, but because the engine was larger than the engine used in the 100, it didn’t adversely affect performance (although drivers didn’t really see much of an increase in performance, either).

The longer body also meant that the car could accommodate additional seats, and the automaker added two rear child seats. These were very small, suitable only for children. While less sporty than the previous model, the four-seater was nevertheless very popular as it had considerable appeal with a wider audience (it was no longer directed solely at singles or couples, but could now accommodate families looking for a sporty, well-performing vehicle).

The End of the Line

The 100/6 officially ended production in 1959, when it was replaced by the even larger and more powerful 3000. This version came with an improved version of the six-cylinder engine that powered the 100/6 (124 bhp), as well as an improved gearbox. Disc brakes were also added to the 3000 (the 100/6 had smaller, drum brakes, so braking wasn’t a high point for the model).

While the Austin Healey 100/6 was only produced for a handful of years, it remains one of the most iconic models of the era, hearkening back to an era when clean, sweeping lines and classic style where the rules of the day.