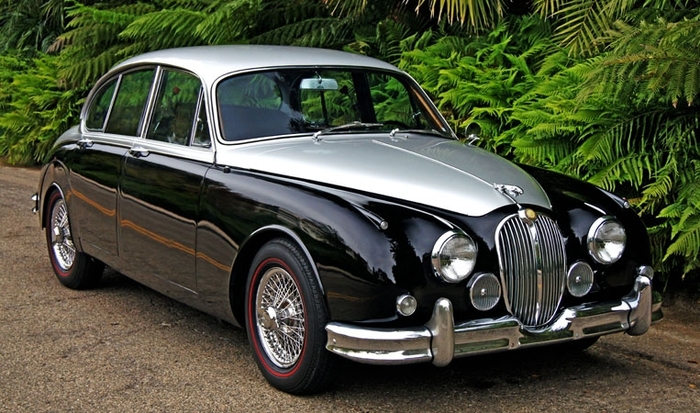 Sir William Lyons’ maxim of “grace, pace and space” was apparent in the design of the Jaguar Mark 2 from the very beginning. This mid-sized saloon was produced from 1959 through 1969 (although the last few years it bore a different name), and it remains an icon of performance, power and beauty.

Ultimately, the 3.8-litre engine actually created 190 DIN bhp, with the other two engines also providing less power than initially claimed. Note that these engines remained the same after the name change in 1967, when the models were dubbed the 240, 340 and 380. Engine output was increased at the same time the names were changed. However, the increase in performance came at the cost of the leather interior, and a change in interior carpeting that were both unpopular.

Body Changes from the Mark I

There were several changes to the Mark 2 in comparison to the Mark I. One of those was the switch over to Arabic numbers from Roman numerals, which was denoted on the back of the car. Another significant change was the increased use of glass around the cabin. The Mark II used almost 20% more glass than the Mark I, which greatly increased visibility for the driver.

Below the waistline, the car’s design remained similar to the previous model. However, above it, there were changes that included slimmer front pillars, enlarged side windows, and a massive rear window. All window frames were chromed, and the radiator grille was also changed. Several lights were enlarged (side, tail and fog lamps) and repositioned, as well.

One of the most notable (and notorious) changes was the addition of a new heating system designed to provide warmth to passengers in the rear of the car. While innovative, it often did not work well. The Mark 2 also introduced the instrument cluster layout that would be used on all of the company’s cars until the introduction of the XJ series II.

While the Mark 2 was popular with families, as well as with police officers for its spacious interior and good power (for the two larger engine options), it was also used in racing quite a bit. Bob Jane drove his to victory in the Australian Touring Car Championship in 1962, and then again in 1963 (both 3.8-litre models). Michael Parks and Jimmy Blumer also drive a 3.8-litre Mark 2 in the Motor Six Hours International Saloon Car Race in 1962.

Jaguar manufactured tens of thousands of Mark 2 models over the course of its production life, and it’s very possible to find one in excellent condition today, which makes it a prime option for those seeking an authentic classic British car.