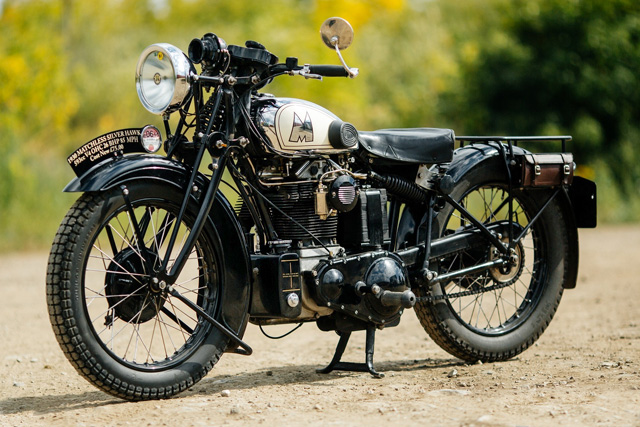 Showcasing the iconic look of bikes from the 1930s, the Matchless Silver Hawk is a classic bike that lacks the acclaim lavished on many other models, despite the fact that it shared the same DNA as the Silver Arrow and was one of only two luxury market bikes introduced at the time with a four-cylinder engine.

The year was 1930, and the Matchless Silver Hawk was introduced at the Motorcycle Show held that year at Olympia, London. The Silver Hawk featured a 600-cc engine (592 actually), and was able to reach a top speed of 85 mph. The unique four-speed engine (V-4) was mated to a four-speed gearbox, and the bike was able to achieve in the neighbourhood of 80 mpg.

Originally designated to lead the Matchless high-end division, sales were ultimately slow, the bike was expensive to make, and production eventually stopped in 1935, just four years after beginning. It featured a wide range of innovations, including enough torque that it could be ridden in top gear without the need for much in the way of shifting.

The Silver Hawk’s frame also featured innovative design touches. Billed as “unquestionably the most fascinating machine to ride that has ever been built”, the Silver Hawk featured a sprung rear end to deliver a very smooth ride, as well as a pressed steel tank for holding engine oil. The centre spring girder was finger adjustable to ensure complete customisation of ride quality, and even the seat’s springs could be adjusted with dials. Perhaps the only drawback (other than cost), was the bike’s braking system, which was par for the course in the 1930s.

While the Silver Hawk might have seen more success as a collectable, there is no denying the fact that if a few key factors had been different on its debut, it would have seen much more acclaim at the time.

One of those factors was the Great Depression, which was wreaking havoc around the world. Another factor was the bike’s price point. Given the fact that purse strings were more than tight throughout the UK, the US and in other nations, luxury motorcycles were not big sellers. The only other four-cylinder luxury bike produced at the same time was the Ariel Square Four, which, despite being 100 cc smaller, was slightly cheaper. This gave the Square Four a slight edge, although it did not sell as well as the company had predicted.

Today, there is no denying the classic lines of the Silver Hawk, or the innovative chassis and suspension design. Given the fact that only 550 models were produced over the course of four years, competition for the remaining bikes is significant. The Silver Hawk has become a bone fide collector’s item, and unrestored models can go for tens of thousands of pounds. A fully restored model could cost upwards of £50,000, depending on the quality of the restoration job.