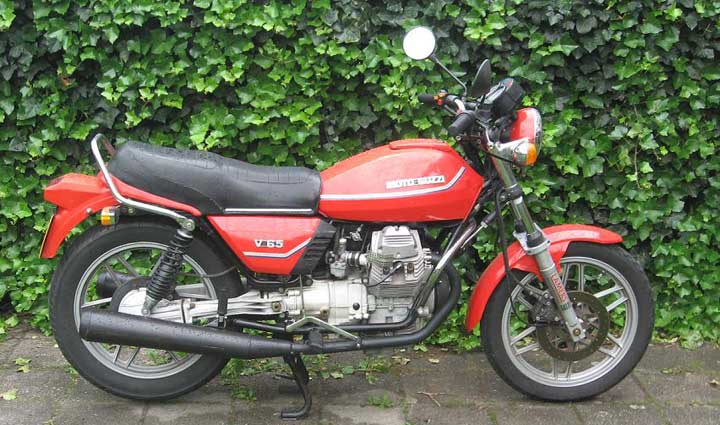 Th Moto Guzzi V 65 has been described with words like “light” and “nimble”. While it originally debuted in the mid-1980s, it remains a perennial classic, particularly for riders who appreciate the ability to ride comfortably and even reach high speeds. Today, it remains one of the best examples of an all-around good bike, and has a loyal following of enthusiasts, although not as many as its older brother, the 1971 Moto Guzzi V7 Sport.

The V 65 was a 650-cc bike, which has largely been forgotten in the drive toward larger and larger blocks. However, it offered an excellent trade-off between power and weight, giving the bike enough performance to be truly all-terrain, but not so much weight that it bogged down. It produced 52 horsepower at 7050 rpm, and was mated to a five-speed transmission.

The Moto Guzzi V 65 began production in 1982, and actually ran through the mid-1990s, although sales had slipped dramatically well before the end. It also offered a number of interesting features out of the box, including enough room for a tandem rider with a “grab bar”, light alloy cast wheels for weight reduction, and a full instrument panel, including a tachometer and a trip meter.

The bike was hailed as being a good all-around performer, with excellent acceleration, crisp operation, and decent comfort for its size and class. There were some complaints about high frequency vibration on long rides, but with a 4.2-gallon fuel tank, those weren’t as long as they might have been.

The Birth of the TT

In 1984, the Moto Guzzi V 65 was joined by a younger sibling. This was the TT variant, and was designed as an all-terrain version of the bike. Interestingly, the TT was actually rated as producing less horsepower than the V 65 standard bike – 48 horsepower rather than 52 horsepower. Its top speed was rated as 106 mph, and it was able to achieve fuel economy of 45 mpg.

The TT was quite popular, in contrast to the V 65’s slumping sales. Several industry magazines called it light and easy to handle, and rated it as being quite capable, while calling the acceleration “quite responsive”. However, there were drawbacks with the bike. For instance, while the regular V 65’s fuel tank held 4.2 gallons, the TT’s tank only held 3.4 gallons.

This meant that while it was fine for getting around town, or even for short jaunts off road, it was not well-suited for actual adventure driving unless a larger tank was added. The standard V 65, by comparison, was able to go much farther, although it lacked all-terrain tires. The TT also got flak for its underperforming front brake.

Both the original Moto Guzzi V 65 and the V 65 TT are considered highly collectible, despite the fact that they were produced during the 1980s and 1990s. Models manufactured closer to the start of production are more desirable than later models – these would be the true V 65s, which stopped production in 1987, followed by the V 65 SP, the V 65 Custom, the V 65 Lario, the TT, the NTX, and several other variants.