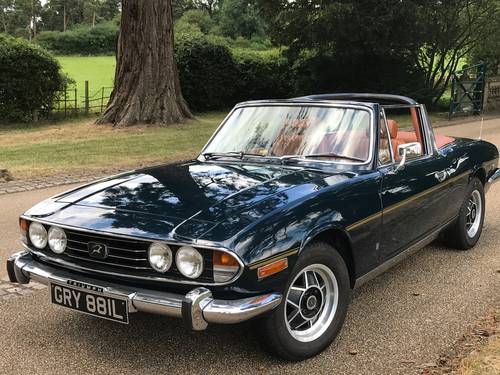 Designed as a luxury sports car, the Triumph Stag had immense possibilities, and debuted to significant applause. While it would eventually go on to achieve infamy, the early days were quite promising.

The Origin of the Stag

Interestingly, the Triumph Stag originated from an experiment in terms of style and design. Harry Webster, Triumph’s then director of engineering, loaned a pre-production Triumph 2000 to Giovanni Michelotti, who cut and shaped it into something different. His prototype was so striking that Triumph ran with it, branding it the Stag.

An Overview of the Car

The Stag was designed and developed as a 2+2 coupe convertible, and that is what it remained throughout its production life. It did receive several updates and upgrades over its relatively brief life, including a standard removable hardtop, an automatic gearbox (or outdated manual as an option), electric windows, power steering and power brakes to name only a few.

The Beginning of Problems

The Stag began its production life with great promise. However, it went on to be named one of the 50 worst cars of all time due to problems with overheating. Sadly, these problems could have been avoided. They began when Triumph decided to remove the 2.5-litre engine originally in the prototype and replaced it with a 3.0-liter V8 that was made in house. The engine suffered from a number of problems, all of which led to overheating. Some of those problems included:

Triumph actually never addressed the overheating issue, other than to begin equipping the car with a higher boiling-point cooling system. While this helped to alleviate some of the instances of overheating, it did not address any of the underlying problems. The most common means of addressing the overheating was for the end buyer to replace the engine after overheating with something else – the Rover 3.5-litre V8 was popular, as was the Triumph 2.5-litre engine that originally resided under the bonnet of the prototype.

Triumph designed several variants for the Stag, including what would ultimately have been a coupe version, although this one was never actually made. However, several models were made with four-wheel drive, as well as a rumoured experiment with a 32-valve engine. Several Triumph 2000s were also converted to four-wheel drive and then outfitted with a Stag engine and gearbox, despite the known overheating issues.

Despite the fact that the Stag was a historically slow seller, with most dealerships in the UK only selling one model per year for the entirety of the car’s production run, it remains relatively widely available. According to the DVLA, there are almost 8,000 registered Stags still in existence, with estimates pushing the actual number of surviving vehicles closer to 9,000. This is good news for enthusiasts, as it means that not only are models available in good condition, but original replacement parts are also available.