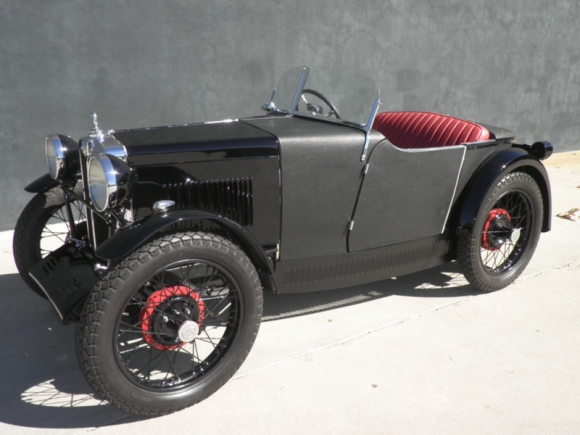 The MG M-Type: Birth of the Midget

The car that ignited the success of MG as a world-renowned automaker and an undeniable power in the sports car market segment was the MG M-Type. This diminutive sportster offered seating for only two people, and was an immediate hit, with buyer demand soaring as soon as it debuted at the Olympia Motor Show in 1928, before it even went into production.

The original M-Type debuted in 1928, but it was not until 1929 that the car actually went into production. The M-Type offered seating for two, and was available as either a roadster or a coupe, although private coach makers did offer variants, including a van version. There was significant public demand for the M-Type even before it entered production, thanks in large part to its compact size, as well as the affordable price tag (less than half the cost of the Morris Minor on which it was based).

The car used an inline, water-cooled four-cylinder engine that put out just 20 horsepower. It also featured an overhead cam design, and measured 847 cc. The maximum speed was 68 mph, and the car actually saw fuel economy of almost 40 miles per gallon. Originally, the M-type used a fabric covered wooden frame, but that was changed to an all metal chassis in 1930. The next year saw an improvement to engine performance, boasting a total of 27 horsepower.

Additional changes to the 1930 model included the replacement of the previous transmission-attached handbrake with a cable system, and the availability of an optional four-speed gearbox. In 1932, MG offered a supercharged variant of the M-Type that was capable of reaching 80 miles per hour.

The M-Type was heavily influenced by the Morris Minor in a number of different ways. Obviously, it used a modified version of the older car’s body, but it went deeper than this, as well. The M-Type actually used quite a few automotive parts sourced from the Morris and then slightly modified. It also used the Morris’ axles and transmission clutch. New springs were developed, though, and the M-Type also featured a different steering column to fit the smaller size and lower driving position.

These differences, as well as the car’s smaller size, helped to make it popular, but also to give it sportier handling. It was a hit not only with the public, but also at the track, quickly racking up wins, including the gold at the 1929 Land’s End Trial, as well as the Double Twelve. The M-Type even made it to 1930 Le Mans, with two models entered although neither actually finished that race.

Today, original condition M-Types are exceedingly rare, perhaps even impossible to find. Throughout its life, MG only manufactured about 3,200 models. One of the few remaining was auctioned off in 2010 for nearly £50,000. Restored and modified versions can still be found here and there, although virtually none of the wood-framed 1929 models exist any longer.