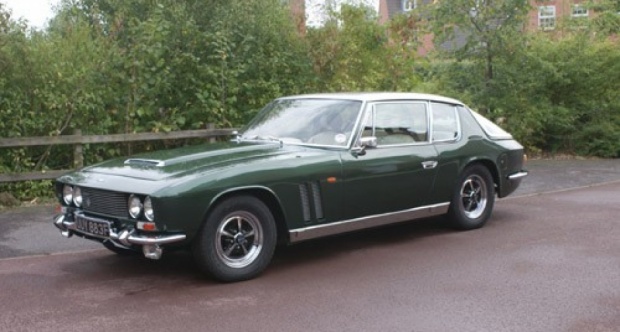 The Jensen FF: A Crowning Achievement of Automotive Design and Performance

When you think about British-produced automobiles, chances are good that MG comes to mind, as well as Morris and several others. However, Jensen definitely deserves to be on that list, even at the top, particularly when considering the Jensen FF.

Manufactured from 1966 through 1971, the Jensen FF was a sleek, stylish tourer from Jensen Motors. It was designed and sold as a four-seater coupe, and the automaker never manufactured a convertible or saloon version.

The FF was responsible for a number of firsts in the industry. For instance, it was the first car not designed specifically for off-road use to feature four-wheel drive (predating both Audi and Subaru’s systems). It was also the first to feature antilock brakes. While cosmetically similar to the Interceptor, also produced by Jensen, the FF was considerably longer and featured very different mechanics.

Initially, the FF came with a 383 V8 engine that produced 330 hp. Later generations would offer a 360 and 440 V8. In all models, the engine was mated to a three-speed automatic transmission. At least one prototype was built with a 7.0 litre Hemi engine sourced from Chrysler in the US, but the cost of importing the engine and the impact of the greater weight on the car’s suspension meant that no actual production models were ever built. However, it is rumoured that roughly 10 models were manufactured with a 7.2-liter 440 V8 engine equipped with a “six pack” system.

Given its technical prowess and the number of features found on no other models, it comes as something of a surprise that only 320 models of the FF were ever manufactured for consumer sale. However, digging into the car’s history as well as the shifts in the automotive industry at the time reveals several reasons for this.

One of the most important reasons for the FF’s lack of traction with the buying public was the car’s price tag, which was 30% higher than the Jensen Interceptor. It was also more than half again as high as competing similar models from other British automakers. This put it largely out of reach for many would-be buyers.

The initial production run and at least part of series two was marred by unrefined handling and systems that were finicky at best. While this was down to the experimental nature of the technology, particularly the antilock brakes, it did the car’s reputation no favours.

Today, it’s possible to find FFs in conditions ranging from un-restorable to pristine, although the limited production run also means that finding a model for sale will be challenging.