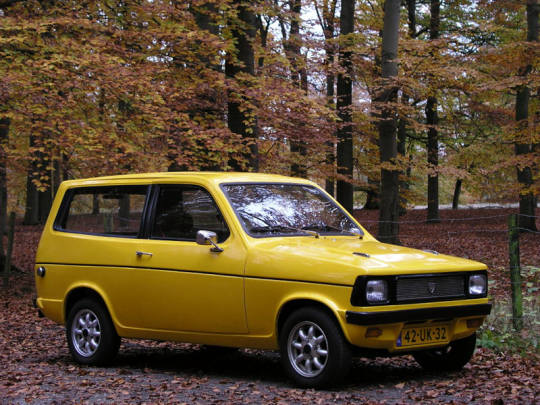 While it might not get the press that the Reliant Regal or Robin did, the Kitten ultimately became one of the company’s more popular vehicles. It shared the four-wheel format of the Rebel and was offered in three different body styles over its production span – a saloon, an estate, and a van.

Like the Rebel, which debuted in the 1960s, the Kitten shared much of the Robin’s DNA. The entire rear half was sourced directly from the company’s three-wheeler, with a new two-wheeled front end designed for it. This allowed the engine to be moved forward, increasing interior space.

The Kitten was produced from 1975 through 1982 and it remained largely unchanged throughout that time. All models had a top speed of roughly 80 mph and a fuel economy of 45 mpg. They were also noted for their reliability and durability, which appealed to average buyers. However, because the car was more expensive than many rivals, it did not see the same widespread adoption they did.

In 1976, two new versions of the Kitten were unveiled. One was a deluxe version, dubbed the Kitten DL. Reliant did not change the body style with this one but offered a significantly improved interior and a new suspension. Some of the most important changes with the DL included more comfortable seats, new trim colours, map pockets in the doors, a parcel shelf, and new gauges showing both battery voltage and oil pressure. A radio with two speakers and fog lights were added, too.

The second variant for 1976 was the van version. Technically, this was just a modified version of the original estate car, but there were a few notable differences. For instance, rather than the estate’s front end, the van used the front end from the saloon prototype with round headlights and no windows in the back. It was made available with or without the passenger seat.

End of the Line

The last Reliant Kitten rolled off the assembly line in 1982. In total, just 4,551 models had been produced over its lifespan. While there was technically no official successor to the Kitten, the Fox debuted in 1983 and slotted nicely into the vacated space. It also shared a lot of similarities with the Kitten but was technically a pick-up that could be modified into an estate or van depending on buyer preference.

The Kitten as a Racer

While the Kitten might not strike you as an ideal race car, it did have its proponents. The Indian variant became one of the more frequently chosen options for use in rally racing, where its ease of modification made it stand out.

Today, the Reliant Kitten is still collected and restored. It’s one of the more affordable options for anyone interested in late 1970s/early 1980s compact cars, too. This is thanks to the significant number of Kittens produced under the Sipani Dolphin and Montana names in Bangalore, meaning that replacement parts are more widely available than you might assume.