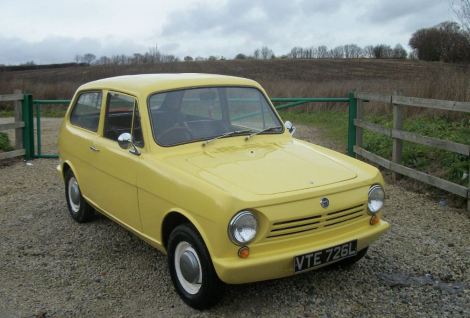 Debuting in 1964, the Reliant Rebel marked several firsts for the automaker. It rivalled marques with wider acceptance in the UK and Europe, such as the Austin Mini, and ultimately had a decade-long production run.

The Idea for the Rebel

Originally, Reliant manufactured three-wheeled vehicles. However, Ray Wiggin, Reliant’s managing director, believed that four-wheel vehicles were more likely to be used long-term. Thus, the Regal was revamped and redesigned to add a fourth wheel. It was dubbed the Rebel, but there was more going on than just a departure from the three-wheeled design.

The Rebel lived up to its name in several different ways, including:

Over the years, the Rebel was offered in several different models.

600 – The original Rebel debuted with a 598cc engine, the same one found in the Reliant Regal. There was just one trim level offered, but buyers could choose options from a list of accessories to customise their vehicles. Six months after launching, Reliant updated the Rebel’s dashboard, seats, suspension springs, front grille, and turn indicators. Depending on the date of production, these models were dubbed the Rebel Deluxe (initial launch only) or the Rebel 600.

700 – Introduced in 1967, the 700 brought more than just a 701cc engine. It also introduced a new estate chassis design with longer rear windows and a large rear door hinged on the side rather than the top or the bottom. The rear seats were designed to fold flat, which provided a significant amount of cargo space in the rear. Later versions of the 700 were available in a van format without rear windows (but with a window kit that allowed you to install them if you liked). The front passenger seat was also optional in the van, which further increased cargo space. Relatively few 700-model vans were produced, though.

750 – The 750 model Rebel debuted in 1972 and shared several key components with the upcoming Reliant Robin. For this model, Reliant offered a 748cc engine, new rear lights, a new four-speed gearbox, and a new radiator. Thanks to the greater marketing efforts on Reliant’s part, the 750 Rebel ultimately became the most popular seller, although production was wound down in 1974 to make way for the Robin.

Today, the Reliant Rebel is a lesser-known collectible vehicle, but because of its scarcity, it can command good prices on the market, particularly those that have been fully restored. While the 750 might have been the most popular in its day, most Rebel models enjoy good collectability today.