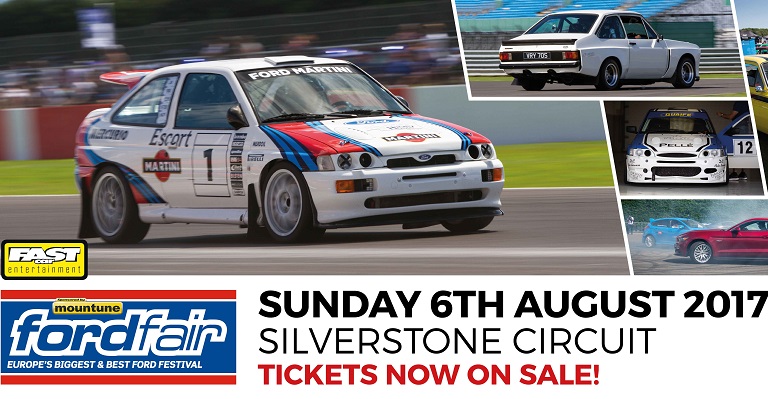 2017 marks the 32nd Ford Fair and the event will be held at the Silverstone once again. This year’s event will take place on the weekend starting the 6th of August, and will see over 18,000 people, as well as over 4,000 cars on display, not to mention exhibits and trade booths. There’s a lot to experience at this motor fair, as well.

Events and Items of Note

You’ll find a host of things to occupy your time at Ford Fair, but one that you will likely not want to miss is the 25th anniversary edition of the Escort RS Cosworth. There will be a very special model on display at the event.

Another option for those who own their own speedster is the ability to actually get on the Silverstone Circuit and test your speed. Note that this does require an additional fee on top of the entrance fee for the fair. With your fee, you get three laps, or you can pay an additional amount and take as many as you want.

Fast Ford, the UK’s largest automotive tuning magazine dedicated strictly for Ford, will be in attendance. The stand can be found at the heart of the fair, and you’ll be able to purchase back issues, rare issues, sign up for a subscription and more. This is also where you’ll find feature cars displayed.

The Ford Club will be out in force. All 4,000 display cars are privately owned by club members, and you’ll have the chance to view them throughout the fair. The fair organisers expect this to be the largest year on record in terms of the number of club cars on display. Club members who want to show what their cars are capable of will exhibit them in the Show and Shine event. If you own a Ford but aren’t a club member, and want to display your car, there’s also an area set aside for you to do that. Note that this requires an additional fee.

The Classic Zone is where you’ll go to get up close and personal with vintage and rare Fords from yesteryear. Again, all of these cars are privately owned by club members.

If you’re in the market for auto parts, you’ll find it at the “retail village”, which combines a swap meet and retail store to provide you with access to parts ranging from vintage OEM option to new aftermarket parts. Note that this area is quite massive, and with almost any sort of Ford part imaginable available, it is an excellent place to find that one part you’re missing from your restoration job.

Finally, there will be food and drink available, as well as entertainment that runs through the midnight closing time for the event.

As you can see, Ford Fair packs in a lot of options within a relatively short time. If you’re a fan of Fords, or just love autos, plan to attend this year’s event in August.