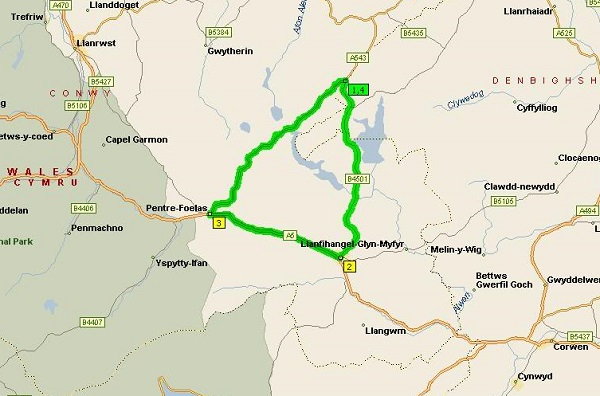 Love hitting the open road? Long to see what the UK has to offer in terms of great driving and great sights? Believe in the power of three? If that sounds like you, then the EVO Triangle has a lot to offer. The Triangle points north, northeast, and is located in Wales. Don’t let that put you off, though. It’s quite the trip.

The base of the “triangle” is the A5, running from Betwsy-y-Coed, then merging with the A543. The beginning section is a little bit bumpy, but it will smooth out as you head towards Dinbych. After a few miles, the road evens out and opens up, the stone walls on either side falling away as you enter the untamed countryside. There’s lots of corners here, so you’ll want a car or a bike that can handle them well.

You’ll be hanging a hard right at the top of the “triangle”. You’re getting off the A5 and onto the B4501. It’s smooth, fast and even. At first, it feels pretty tame, but give it a few miles and things will change. You’ll start encountering tight turns as well as some very interesting twists that really put your motor to the test.

Towns along the way

The EVO Triangle runs from Cerrigydrudion at the bottom right corner (on the map) to Pentrefeolas at the bottom left, up to Llyn Bran at the top of the triangle, and then back down to Cerrigydruidion again. The name comes from EVO magazine, the staff of which uses this route to test the handling and performance of the cars they review. According to Internet sources, “It is considered an excellent test of car and driver, and the route has become very popular among driving enthusiasts, and one of the most talked about routes in the UK.”

The actual route followed by the EVO Triangle spans just 20 miles, but it’s one of the most impressive courses out there for drivers hoping to put their cars through their paces. It runs the gamut from hills and moors to flatlands to hairpin turns and everything in between. While it’s not as “high octane” as some of the racetracks out there, it’s an ideal place to see what your car can do, particularly if you’re interested in cornering.

As a note, you should be aware that livestock such as sheep can be present on the course. This worry fades away as you get into the forest along the B4501 section of the road. Pay attention to the views as you power through the course, though, as they’re some of the most engrossing in Britain, offering you some of the most spectacular scenery you’re going to find.

When everything’s said and done, the EVO Triangle isn’t the most challenging road section in the UK. It’s not the most demanding, and it’s not the most hair-raising. However, it is one of the best options for drivers really hoping to see how their cars perform under normal road conditions, and upping the ante in terms of speed will increase the drama of the road. Saying that, don’t get too carried away in areas where livestock abound, or you could find yourself in need of an auto repair shop.