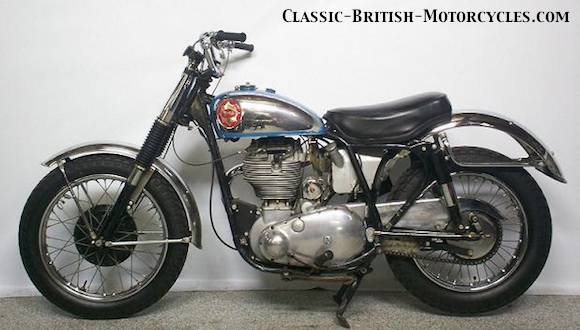 Dubbed “Goldies” by riders and fans, the BSA Gold Star line of motorcycles has a rich and storied history that dates back to the 1930s. Production began in 1938, and ran through 1963, and was comprised of both 350 cc and 500 cc engines.

It featured a 496 cc engine and lacked attachment lugs for a sidecar. It also used a rigid frame, and springer front end. Throughout its production run, the Gold Star was influential on the race track, as well as with consumers. Production of the first Gold Star model continued until the outbreak of WWII, when BSA moved most of its production to supporting the war effort.

After the war ended, BSA once again turned to consumer-facing production, and released a new version of the Gold Star. This one used a 348 cc engine, but came with a very wide range of performance accessories that buyers could choose to customise their motorcycle to their specific preferences. All of these bikes were assembled by hand, and the factory tested performance on a dynamometer, sending the results to the buyer to prove horsepower and torque.Trim levels offered included tourer, scrambler, club man, racing, trial and ISDT. The 499 cc Gold Star was also available at this time.

The Beginning of the End

By 1955, BSA had dropped the CB and BB models (engine designations).This left only a single engine, dubbed the DB. The main claim to fame for these engines was improved oil feed to the crankshaft, but the smaller 350 engines did see a thicker line and a revised cylinder barrel. This year of production also saw the introduction of a larger, five-gallon fuel tank, as well as a new muffler and a much larger front brake.

By the end of 1956, the only trim options available were the club man and scrambler options. The racing, touring and road versions were eliminated. The 350 engine was also eliminated, but it reappeared as a special order option fora short time in 1960.

Ultimately, the Gold Star was doomed because of its engine design. “Big singles” couldn’t compete with newer twin models or the off-road oriented two-stroke engines, and as Japanese motorcycles started to gain more prominence, the BSA Gold Star’s popularity waned. Production officially stopped in 1963, and the Gold Star was replaced with the much less popular B50, which was actually developed from the much smaller 250 cc BSA C15.

Today, all Goldie models are popular with collectors. However, the DBD remains one of the most popular options.