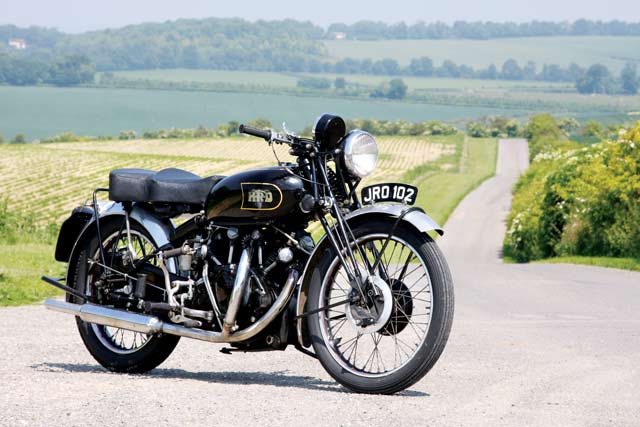 Hailed by Popular Mechanics as “the first super bike, and maybe the best”, the Vincent Black Shadow is also the favourite motorcycle of famed late TV show host and comedian Jay Leno. A Black Shadow ridden in the 1952 world speed trials in Montlhery, France, where it set the world speed record for the time. The bike was first produced in 1948, and remained in production for a very limited amount of time. In fact, fewer than 2,000 Black Shadows were ever produced.

A Look at the Black Shadow

Unlike many other bikes of its day, the Vincent Black Shadow was never really planned for production. The bike manufacturer started out with the Rapide, but the market demanded something more oriented for speed and performance. The Rapide was revised and blueprinted, and the Black Shadow was born.

The popularity of the Black Shadow was instantaneous and immense – so much so that it actually outsold its predecessor, the Rapide

The Black Shadow featured a number of innovations that made it stand out from other racing-oriented bikes of its time. One was the fact that the engine was an integral part of the frame, rather than simply being cradled by rails.Another was the fact that the bike made heavy use of aluminium alloy through out its frame to reduce weight at a time when most bikes used heavier metals. Another interesting difference is that it used a sprung rear sub frame.

Yet another interesting difference, and one that set the Black Shadow apart from other options on the market, was the fact that it came with four drum brakes. In comparison, all American-made bikes of the time had only a single rear brake, and most British-made bikes had two at best.

However, perhaps the most visible difference was its colouring. At a time when most motorcycle manufacturers focused on heavy use of chrome, the Black Shadow was, well, black. The entire body, other than the exhaust pipes and a few other pieces of trim (wheels, for instance) were painted black. Interestingly, there was a White Shadow variant produced, although only 16 bikes were every built in this colour.

The Shadow featured a 998 cc engine that produced 55 horsepower (in comparison, the Black Lightning racing variant put out 70 horsepower). However, that engine was more than sufficient to break the 100 mile per hour mark. In fact, top speeds of 125 miles per hour were recorded. This was a time when most bikes struggled to actually reach 100 miles per hour.

1955 marked the end of the road for the Vincent Black Shadow. In many ways, the sheer customisation possible with the bike was its downfall. Buyers started opting for newer bikes that required less maintenance, or needed fewer adjustments to suit their riding preferences. However, the Black Shadow has never truly gone out of style, and remains one of the most sought after bikes ever manufactured.