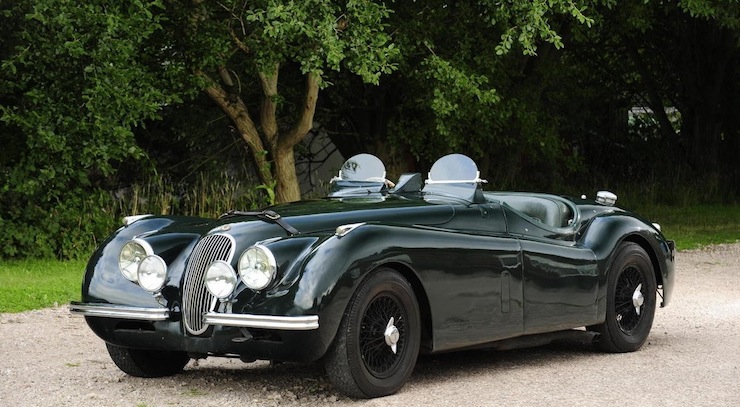 Jaguar is one of the UK’s most iconic automakers, with a history ofcreating vehicles that embodied the drive to deliver power and performance inan aesthetically pleasing package. The XK120 was precisely that – power,performance and prestige packaged in a streamlined format that embodied all thebest qualities of the marque. Today, the XK120 remains one of the most popularmodels ever produced by Jaguar, falling slightly behind the SS 100.

Initially, the XK120 was supposed to be little more than a concept carto show of Jaguar’s newest engine – the XK in the car’s moniker. It was a3.4-litre straight-six affair that produced 160 bhp and delivered a top speedof 120 miles per hour (the 120 in the car’s name, of course). However, while itmight have originally been designed as nothing more than a concept car, demandfrom the buying public was so significant, that the company decided to go aheadand put it into production. The first production models were assembled anddelivered later in 1948.

Originally, the car utilised a wooden frame with aluminium body panels,but after the first 242 cars were produced, that was changed to an all-steelbody. While this was 112 pounds heavier than the wood and aluminium option, itwas stronger and sturdier. The XK120 was originally produced in three formats –an open two-seater, a closed-two seater, and a drophead coupe. The closed coupeformat debuted in 1951, and the drophead version came to market in 1953.

The car boasted a 3.4-litre engine throughout its production run, butthat engine saw several revisions over time. The initial engine offered 160bhp, while the engine that debuted in 1951 offered 180 bhp. The engine used beginningin 1953 offered 210 bhp, and the final engine offered 220 bhp.

The XK120 was, at the time, the world’s fastest production car, with atop speed of 120 miles per hour with the windscreen lowered. This led directlyto it being associated with racing and rallies around the UK, in Europe, andaround the world. The car took its first victory in 1949 in the One-HourProduction Car Race sponsored by the Daily Express. In 1950, it won the US PalmBeach Shores race, followed by the inaugural Pebble Beach Road Race. Other winsand notable finishes followed, including Le Mans, Mille Miglia, Silverstone,the Tulip Rally, and many others.

Today, the Jaguar XK120 remains an icon of performance, power andprestige. It is also highly sought after by collectors, but the significantnumber produced over time (more than 12,000) ensures that models in very goodcondition can still be found for less than exorbitant prices. The XK120 doesnot have the same collectability of the SS Jaguar 100, but it remains one ofthe most collectible UK cars, and its connection to racing and rallying makesit very popular with collectors with a passion for speed and performance.