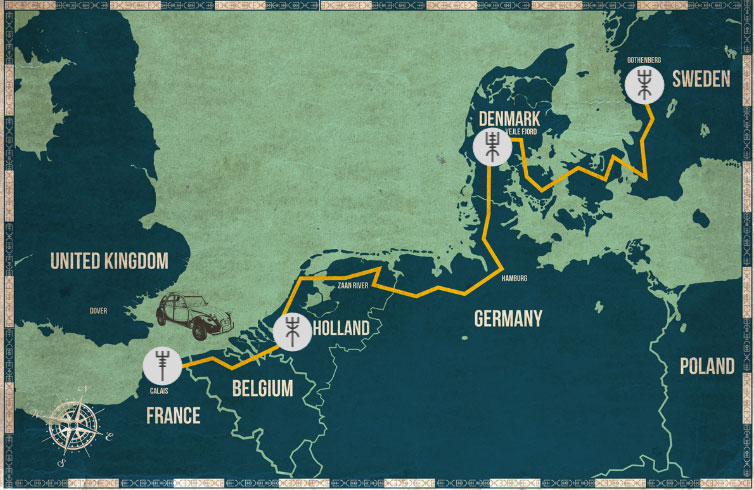 Love the thrill of rally racing, and want theopportunity to pit your skills against those of other drivers on a uniquecourse that covers multiple countries? If that sounds like you, then The RustyRally Challenge might be just the ticket. It’s an interesting race that spansover six different countries, and runs for three entire days.

What’s the Course Like?
The Rusty Rally Challenge spans six different countries, including France, Germany, Belgium, Denmark, Sweden and Holland. It runs from the 14th of September to the 17th of September (2017), and is dubbed “The Viking Route”. The race’s motto is, “A European adventure for the mediocre motorcar”, and you’ll find that it lives up to that.

The course itself is all on pavement, butyou’ll drive through a vast amount of countryside, as well as through urbanareas. Some of the roads are exceedingly narrow, and there are multiplemountain passes that will try the skills of even experienced drivers. All inall, drivers will be required to cover 1,000 miles in this epic race. Thecourse starts in France, and then runs through Belgium, into Holland, acrossGermany, through Denmark, and then across the sea to Sweden.

Calais is the kick off point for the race, and you’ll only need to drive about 20 miles the first day, before stopping in Groningen. The next day is a much longer drive through Germany and then into Denmark. The final leg is not as long, but covers both land and sea, so it will be quite arduous. It spans Denmark to Sweden, where you’ll end the race in Gothenburg, before having a day to rest and recover.

You’ll have three nights to spend on the road, all of which will be in 4-star hotels along the way. Your ticket price includes your nightly meals, as well as wine. Note that your ticket price does not include any fees involving your vehicle, including insurance, fuel and the like. You will be responsible for paying those costs out of your own pocket during the race. Note that your registration fee does provide you with access to two RAC-trained mechanics during the race to help with car-related woes.

What Kindsof Cars Can Compete?

“Mediocre motorcars” are the aim of this race,so you can drive just about anything you might want, so long as it isn’t ahigh-performance machine. That means you can drive restored classic cars, aswell as modern cars that offer moderate performance. It’s really geared forvehicles that have not been refined or retrofitted, hence the “rusty” moniker.

While the rally is about having fun, there’s amore serious underlying goal here. All competitors will help raise funds forThe Outward Bound Trust. In fact, every car involved in the race is responsiblefor donating or raising £10,000 in order to participate. An additional £250 isrequired as an entry fee.